Generating power off the grid

For better or worse, the property that my wife and I fell in love with was over a mile back down a private road, and our few other neighbors have summer-only cabins. There are no services of any kind that come down our road, no phone, no cable, no fiberoptics, and of course, no power lines. The neighbors heat with wood when needed, and handle cooking and a small amount of power generation with propane. I looked briefly into bringing power lines back to our site, but an off grid solution became the obvious choice when I realized that the price would greatly exceed $100,000 just to put in the power poles. I already had quite an interest in sustainable energy and solar power, so this provided just the impetus that I needed to pursue an off grid home.

I'll list the vital statistics of our system first, and then say a bit about how the system has worked so far, as well as the updates that have already been implemented. 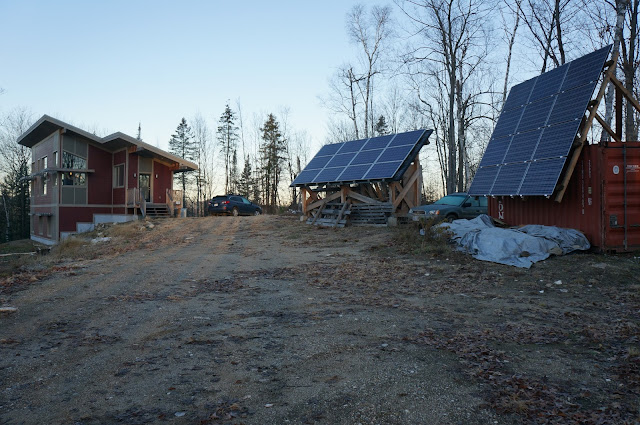 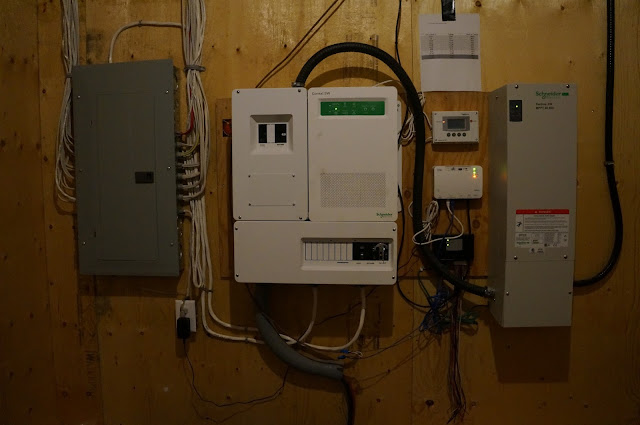 How the pieces fit together
Any electrical grid starts with power generation, and ours is no different. The majority of the time, all of our electricity needs are supplied by solar panels. However, there are times when the panels can't produce enough power (at night and on cloudy days) when it is needed. Generally the batteries serve the role of storing enough energy to get us through a couple of days without much sun. When the battery charge gets too low, the backup propane generator turns on, sending power into the house via an alternator to be used both to power the house and recharge the batteries.

The electronics provide for energy transformations and communications. The charge controller takes high voltage power coming from the solar panels, and steps it down so that just the right amount and voltage (a bit over 48V DC) of power is passed on to the other systems. Most of this power is dumped straight into the batteries, which chemically store that electricity for later use. When power is needed for loads in the house, that 48V power coming from the batteries and charge controller is drawn into the inverter, which converts the power into the normal household power found in any home, 120V alternating current, which goes out through a standard breaker panel to the house. The inverter is actually an inverter/charger, so in addition to taking DC power from the batteries and solar panels out to the house, it can also convert AC power from the generator (or for others' setups, the power grid) into DC power to charge the batteries. The Automatic Generator Starter is able to start the generator whenever the battery voltage falls below a certain level, ensuring that the batteries are never discharged too deeply. Finally the Combox provides an interface for controlling all of the other devices, as well as being able to connect to the internet, which I use to check the system remotely and send regular system status updates by email to myself.


Solar panel orientation
There is a simple rule of thumb that I learned from our solar installer when we were discussing our system setup, with the best orientation for stationary panels being due south, with an angle equal to one's latitude on Earth. This maximizes the annual output of power from a given solar panel. We are at 45° north, so we ought to set our panels at the same angle to the ground. For our original panels, we were able to get this orientation, due south and at a 45° angle.

Through our first winter, I realized that there are some nuances to an off grid system in the northcountry that aren't captured by that rule of thumb. There are two main problems with following this rule. The first is snow. It turns out that panels set at 45° don't shed snow as well as I'd hoped. The snow will clear after a day or so of sunny weather, but while the snow is still there, no power is produced. Clearing them manually works fine, but we are not always there to do it. The second problem is that an off grid home is not in the business of producing the maximum total power over the year, it is about always having enough power available to keep the house running. Our summer power loads are extremely low, as no heating is needed, days are long and so little lighting is needed, and we are outside much more often. In the winter, when there is already less sun, our electricity needs are actually much higher.

These two problems have a shared solution, to set solar panels at a much steeper angle. This allows snow to shed off very easily, and squares the panels much better to the low angled winter sun. Of course it is possible to get around this problem with such things as seasonably adjustable solar panels, or the significantly more complicated sun tracking systems, but the simplicity (and reduced cost) of fixed panels is quite attractive. I would go so far as to say that if one is going to have stationary panels in the northern US or Canada on an off grid home, that orienting them for the winter is the best path to follow.

In our first two winters, we were overly reliant on our (poorly functioning) generator through the winter, and so earlier this fall, we added just such an upgrade, an additional solar array set at an angle of 65° from the ground. These should greatly reduce the amount of run-time that will be needed from the generator in future winters. As you can see from the picture below, the new panels also are turned a bit to the south-west, which is intentional. There is a better clearing in the trees toward the west, and so the new panels are turned a bit so that they will be receiving direct sun for a greater portion of the day. 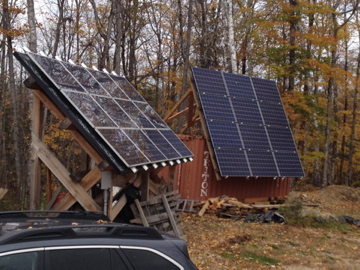 Power generation through the year
Finally, I've attached the power production estimate that my solar installer created for me prior to installing the system. While a few details changed after these estimates were made, there is an incredible wealth of data here about our local solar resource, expected consumption of power at our home, the efficiencies of the various components of an off grid power system, and more. For any readers who may actually be considering building an off grid system, this is the sort of nitty gritty details that you will need to consider.