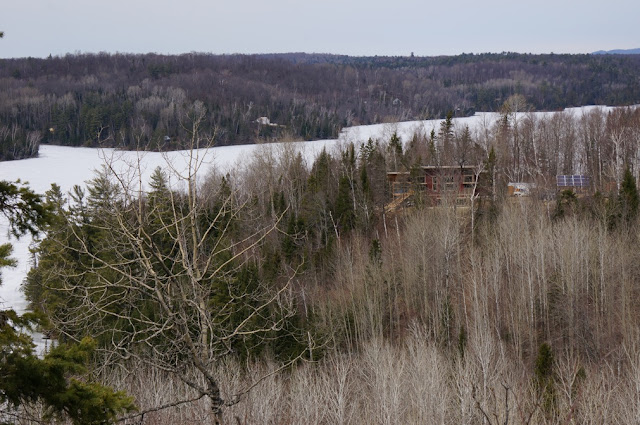 Forest surrounds the home on all sides, with amazing views of a small valley to the south, and a back bay of the river visible about 150' to the west of the house. We chose a hilltop location, in large part because of the views it afforded. The other advantages of this location are excellent southern exposure for both passive and active solar, as well as it being much less buggy than the surrounding lowland areas, due to it being drier and windier. That wind is a double-edged sword, however, as we are much more exposed to the whipping winds of storms and winter, which probably increase our heating loads a bit and have also put me in place to watch trees topple over and land within 20' of the house during a particularly vicious summer storm.

The clearing that we opened was just large enough to build the house and yard, a bit less than half of an acre. On the north, west and south sides of the house, this means that the forest begins only 20' from the house. To the southeast is a grassy yard big enough to cover the septic field, and to the east is a parking area with our solar panels tucked onto the north side of the clearing to reduce the shading from the trees. Unlike most of the homes built along the waterfront in our area, we did not clear sightlines towards the water. We currently have a screened view of the water, which actually makes those glimpses out onto the bay more special. 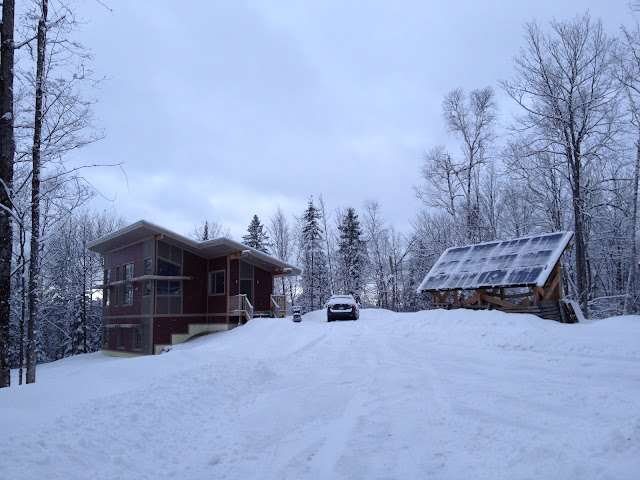 Trees were kept strategically so that the house would be well shaded during the summer season, both from the south, but most especially against the hot afternoon sun out of the west. The best way to accomplish this is with deciduous trees, red oak and sugar maple in our case, so that all through the leafy summer season the house stays as deeply in shade as possible, while in the winter the lack of leaves allows the sunlight to stream right in. The existing larger trees at our site helped to determine where we would set the home so as to best take advantage of that shading.

The rule of thumb that I have read and been told multiple places is that one ought to be within 15 degrees of south to take advantage of passive solar heating, but with our site, we were able to square our house perfectly to the sun. This means that at solar noon1 the sun shines straight into the south windows of the house. This perfect east/west orientation gives a few unexpected benefits. One is that our entire house acts as a sundial; one can simply look at the angle of the shadows cast on the ground as the sun streams in the windows to know the time. Also, on the spring and fall equinox, we get the sunrise and sunset shining all the way across the home through the windows on the east and west sides. I noted this spring that in the downstairs bathroom (at the northeast end of the house), sunsets around the equinox are really the only time that the room gets direct sunlight at all.

Passive solar design principles suggest that a longer east-west axis is used, with windows focused as much as possible to the south side. This allows for the south wall and windows to soak up the winter sun, while minimizing the east and west faces which can heat up excessively in the summer. We doubled down on this logic by making our home a rectangle elongated east to west, with a much taller south face full of windows. At the same time, the north side was banked into a hillside with only a few small windows, as since north windows are always in the shade they constantly lose heat through the winter. We broke only one rule of passive solar design by putting a lot of west facing windows, but this was a worthwhile trade-off to capture the views of the river, and trees provide good summer shade to the west.

With all of the big windows, especially in the upstairs, it certainly has the effect of bringing the outside into our home. The views change with the seasons, with veiled views during the summer and fall due to all the leaves on the trees, with much clearer lines of sight in the winter. This allows us to really soak in the valley and hill to the south, and the river to the west.

In figuring out details about the house, its orientation, and which trees to keep or cut, I spent a lot of time looking at the solar chart shown below. It packs an enormous amount of information into one graph, showing the length of the day, angle of the sun above the horizon and simultaneously its location in the daily east to west motion, and does all of this for every day of the year. With a bit of measurement and calculation, I could imagine how the sun would play across the house throughout the day and across the seasons, and plan for windows, shading, and solar panels. 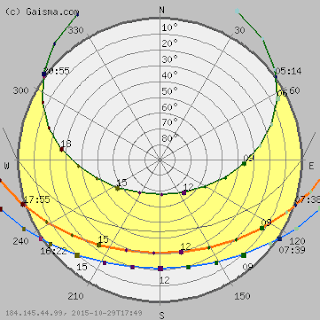 Accessed from http://www.gaisma.com/en/location/ottawa.html
See their site for a longer explanation of how to read the graph

All in all, we have been very pleased with the siting of our home. I have recently read that there is some doubt as to whether applying passive solar principles is worthwhile in the age of superinsulated homes (see here), but I still wouldn't change a thing. Even though we did a lot to maximize our solar gains, we at the same time were able to meet all of our aesthetic goals, both inside and out.


1 South as measured by the sun is a bit different from magnetic south, and solar noon a bit different from noon on a clock. Solar south is the 'true' south, and corresponds to the point where the sun is exactly half-way across its trajectory across the sky and at its highest point. Solar noon is the time at which the sun reaches that point. At our house, this works out to be at about 12:05 pm local time in the winter, and 1:05 pm in the summer. Your match of solar noon to the clock will depend on where you are located within your time zone.

As a further aside to this footnote, I also need to mention that I had always thought that the 'real' time with daylight savings time was during the summer, probably because I enjoyed the brighter and longer afternoons. But actually, it is the winter clock setting where noon on the clock closely matches with the actual middle of the day as based on the movement of the sun.↩
Written by Craig at 10:51